With the increased use of electronics across industrial, transportation and medical applications, designers of the supporting power subsystems need to ensure high performance in physically and electrically demanding environments, while also meeting strict regulatory and safety requirements. At the same time, they must stay within ever tightening budget and design schedule constraints.

The DC/DC converter has evolved dramatically over time to meet many of these requirements. They have decreased in size for higher power density, to save space, and offer wide input ranges to simplify inventory and lower the bill of materials (BOM). Other enhancements to make a designer’s task easier include low-noise outputs, tighter load regulation, strong protection and safety features, and remarkable attention to thermal management. However, as designers might expect, not all DC/DC converters are the same, requiring them to be discriminating in their selection to ensure design and application success.

This article will feature DC/DC converters from Bellnix, HVM Technology, Murata Power Solutions, Vicor and XP Power that are compact, ensure low ripple noise, and cater to single  and dual-output voltages. It will also highlight and explain features and enhancements, and how they can help designers boost power adjustment capabilities, lower noise, ensure self-protection, and provide better thermal management.

As the name implies, a DC/DC converter takes a voltage as input from a DC source and converts it to an output that is at another DC voltage. The output can be either lower (buck converter) or higher (boost converter) than the input voltage. DC/DC converters are either isolated or non-isolated. An isolated DC/DC converter uses a transformer to eliminate the DC path between input and output (Figure 1).

Figure 1: This DC/DC converter is isolated, as indicated by the transformer between the input and output stages. (Image source: XP Power)

In contrast, non-isolated DC/DC converters, often used when the change in voltage is small, have a DC path between input and output.

Key performance characteristics of DC/DC converters include efficiency, current rating, ripple voltage, regulation, transient response, voltage rating, size, and weight. For more on these, see “Introduction to DC/DC converters.” Designers also need to be concerned with a converter’s ability to support a wide range of nominal input voltages. This allows one converter to support many applications—reducing inventory and logistics—assuming it’s also able to provide the necessary output voltage and current rating required for the expected loads.

Depending on the application and the nature of the power source, protection against overvoltage, undervoltage, reverse polarity, short circuit, and over temperature conditions are also crucial. Likewise, good electromagnetic compatibility (EMC) and electromagnetic interference (EMI) compliance are a must. This is particularly important given that the switching power supplies used in DC/DC converters can introduce noise directly into the load and can emit RF noise that can affect the stability and accuracy of nearby circuits.

Finally, designers should carefully review the thermal characteristics of the converter in the context of the application’s design and operating conditions so that adequate ventilation and other thermal management techniques can be applied as needed.

Smaller is better for DC/DC converters

Several applications demand DC/DC converters in compact form factors to save space and simplify installation. For such applications, Bellnix engineered the OHV series of 1.5 watt medium-to-high voltage DC/DC converters specifically to reduce the mounting area required by nearly 60%, compared to modules available at the time of development. A sample device is the OHV12-1.0K1500P, a system-in-package (SiP) that measures 44 x 16 x 30 millimeters (mm) and which outputs 1000 volts at 1.5 milliamperes (mA) (Figure 2). Bellnix also designed the series to keep the ripple noise to as low as 5 millivolts (mV) peak-to-peak (P-P).

The devices’ low ripple noise of 5 mVP-P is important for applications such as instrumentation, where any instability in the high-voltage power supply can induce noise and affect the accuracy of the equipment. Bellnix has developed its own circuit technology to keep noise to a minimum, and while the devices are self-contained—with no external components required—designers can add components to further reduce noise and also reduce input impedance (Figure 3).

Figure 3: To reduce input impedance due to lead length between the supply and the converter, designers can add capacitor C1 on the terminal side. To further reduce noise, C2 can be added across the load. (Image source: Bellnix)

For example, to reduce the input impedance caused by extended distance between the converter and the power supply, capacitor C1 can be added at the input. This capacitor should be placed on the terminal side of the converter to reduce lead inductance. To reduce noise, a capacitor (C2) can be placed carefully near the load such that it has minimum input-output wiring, with special attention to creepage and spatial distances.

All devices in the line have built-in short-circuit and overcurrent protection, and they further boost the reliability of the power supply with a five-sided metal case that uses additional shielding to safeguard the device against excessive heat and temperature. The output voltage on the OHV series can be controlled from 0 V to 2000 V by an external voltage or an external variable resistor.

For designers of battery-powered devices, HVM Technology’s nHV series offers precision regulated power of 100 milliwatts (mW) at up to 1 kilovolts (kV) in a package measuring 11.4 mm x 8.9 mm, with a height of 9.4 mm. Specifically, the load regulation is < 0.2% (typical) from no load to full load.

The series employs a high impedance programming input (100 kilohms (kΩ)) to make the devices easy to install and eliminate the need for a low-impedance adjustable power source voltage. The output voltage is independent of the input voltage and is instead proportional to the programming voltage to ensure robust linearity.

Like the nHV series, XP Power’s DTJ15 and DTJ20 series of 15 watt and 20 watt DC/DC converters are also miniaturized for easy installation and power-efficient operation, but with a twist: they can be installed to a chassis or DIN rail and connected via screw terminals (Figure 4).

Besides easy installation, what’s important about these power converters is their ability to cover a wide DC voltage input range, spanning from 9 volts to 36 volts, and 18 volts to 75 volts. A variety of input sources, including multiple nominal battery voltages and vehicle supplies, allow these converters to serve a broad range of industrial, commercial, and communication applications.

Figure 5: The DTJ15 and DTJ20 series DC/DC converters are notable for their wide input voltage range, as well as their output range, the latter giving a total of 14 variants. Image shows output for DTJ15, 15 watt converter. (Image source: XP Power)

Power system designs for railway, industrial, and transportation applications demand fast settling times to transient step loads. Other transient events such as oscillations in the input and output voltage make the self-protection features critical for the safe and reliable operation of DC/DC converters.

In current limiting, also referred to as power limiting, as soon as the output current increases to approximately 130% of its rated value, the DC/DC converter will go into a current-limiting mode. As a result, the output voltage will start decreasing proportionately to maintain somewhat constant power dissipation.

Murata’s IRE-Q12 Series of isolated DC/DC converters feature self-protection features to ensure that there are no adverse effects from higher capacitive loads (Figure 6). For example, the IRE-12/10-Q12PF-C incorporates all relevant self-protection features while meeting the EN50155 requirements for facilitating nominal battery voltages during brownout and transient conditions.

Figure 6: The IRE-Q12 series converters go through extensive testing to ensure that they can withstand the harsh environmental conditions typically found in railway and industrial applications. (Image source: Murata)

The IRE-Q12 Series converters provide a single 120 watt isolated output from an input voltage range of 9 volts to 36 volts in a standard eighth-brick package and footprint. It also provides two baseplate options, one for minimal board space consumption, the other a slotted flange for mechanical fixing to a heatsink.

The output of these DC/DC converters can be trimmed +/-10% to ensure fast settling times to transient step loads. Furthermore, all of the converters are tested and specified for input reflected ripple current, input terminal ripple current, and output noise.

Vicor’s DCM2322 is an isolated DC/DC converter series that operates from unregulated DC inputs ranging from 9 volts to 50 volts to generate an isolated 28 volt output (Figure 7). It’s based on the company’s double-clamped zero-voltage switching (DC-ZVS) topology that helps it deliver a high efficiency of 93% across the full input voltage range.

The DC/DC converter module (DCM) units, such as the DCM2322T50T3160T60, leverage the thermal and density benefits of Vicor’s ChiP packaging technology that distributes the internally generated heat evenly across the surface of the package. The ChiP technology also enables the DCM converters to offer flexible thermal management options with very low top and bottom side thermal impedances.

The efficient thermal distribution allows the DCM units to feature connectivity from a variety of unregulated power sources to the point-of-load. They provide both input and output overvoltage fault protection and other fault handling mechanisms that shut down the converters when a fault is detected (Figure 8).

In applications that call for more power than a single DC/DC converter can deliver, such as data centers and telecommunication gear, multiple devices can be used in parallel. Multiple DCM converters can be paralleled in array mode for higher power capacity via load sharing, even when they are operating off different input voltage supplies. Vicor has qualified arrays of up to eight DC/DC converters for 480 watt capacity.

For designers of power supplies to support electronic systems for industrial, medical, transportation, and instrumentation applications, the complexities and associated costs are many, from the need for wide input voltage ranges to thermal management and load sharing. However, as shown, DC/DC converters have evolved into ever-smaller, easy-to-install, self-contained power supplies that eliminate many of those complexities.

Still, for designers looking for better performance, additional components can be added. Also, where more flexibility is required, remote and programmable features are increasingly available to carry out impedance compensation and facilitate a variety of protection features to avoid burnouts, respond to transient conditions, and reduce overall system power consumption. 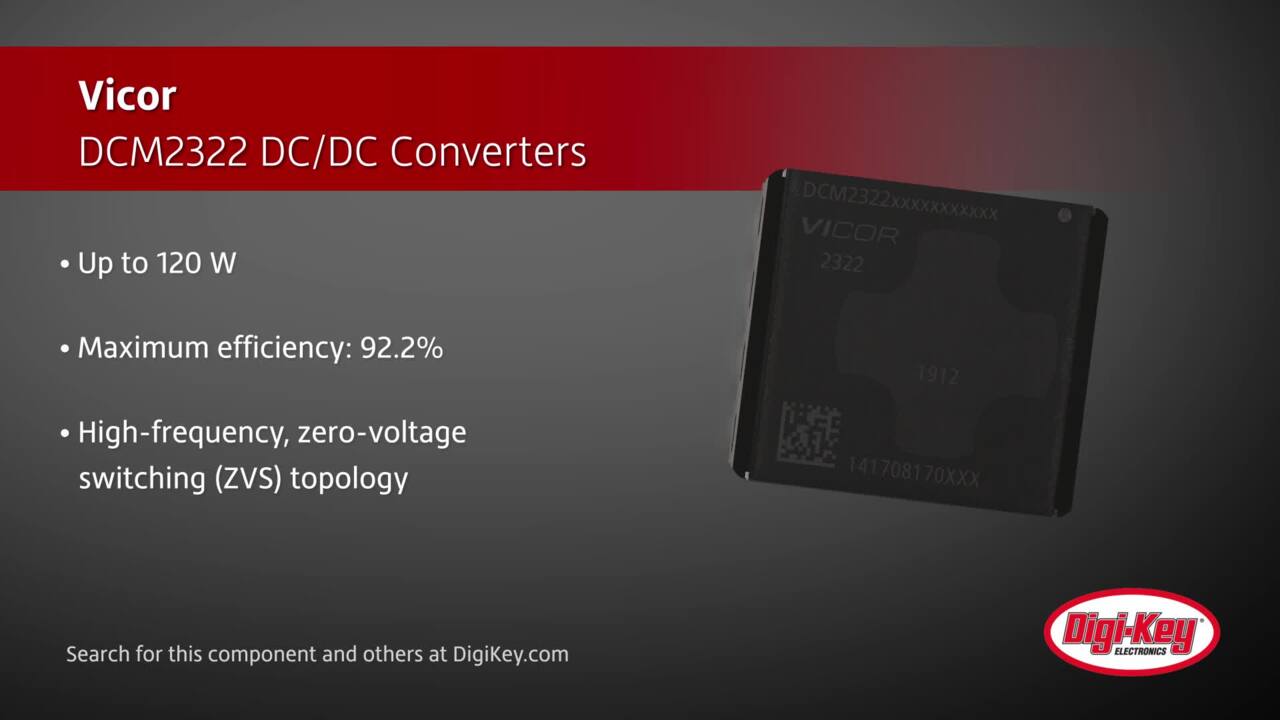 Majeed Ahmad is an electronics engineer with more than 20 years of experience in B2B technology media. He is former Editor-in-Chief of EE Times Asia, a sister publication of EE Times.

Majeed has authored six books on electronics. He is also a frequent contributor to electronics design publications, including All About Circuits, Electronic Products and Embedded Computing Design.

A community dedicated to answering and asking engineering and component questions. Try some of our top forum pages.

What is my Order Status?

Registered users can track orders from their account dropdown, or click here. *Order Status may take 12 hours to update after initial order is placed.

How do I return product?

Users can begin the returns process by starting with our Returns Page.

How do I find price and availability?

Quotes can be created by registered users in myLists.

Visit the Registration Page and enter the required information. You will receive an email confirmation when your registration is complete.